The country of Greece has many small and bigger islands within its sea borders, but the largest one, Crete, stands out. This part of floating earth on the Aegean Sea has been known for its history and culture, the unique mix of European, African and Asian nature as well as the richness that could be found in its cuisine. With each region having plenty of local dishes to try on, Crete is undoubtedly a gastronomical paradise.

Starter, main or to ease your hunger – Sfakiani pie

Both locals’ and visitors favorite, this cheese stuffed pie gets its name from the southern coastal region of Sfakia. Fried in a pan and with a spoon of Greek honey on it, Sfakiani pie could be an ideal dish for either breakfast, lunch or even just dinner. 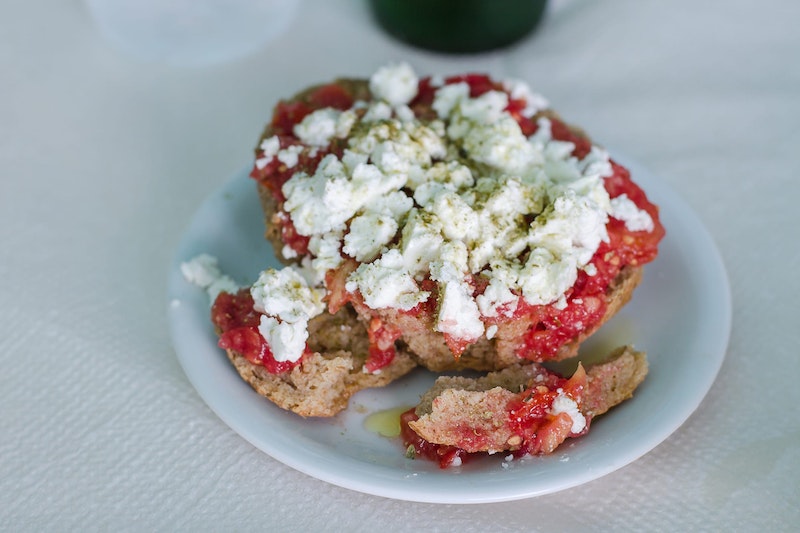 Even though Dakos can be found anywhere in Greece, this Cretan dish should be tried in its birthplace. Cretans love to soak them in water or olive oil and complement with local ingredients, such as red, juicy tomatoes and a creamy cheese made from goats, myzithra.

To make a difference – Apaki

This is a dish that has a very unique taste. For two to three days, a piece of pork meat will be left to marinate in vinegar and, following that, it will be smoked with herbs and spices. In this way, the meat will get an uncommon to human nose aroma, but a unique taste to your mouth. Apaki can be eaten either as a meze (small plate) or with vegetables.

For the adventure foodies – Chochlioi

For many, this Cretan dish is thought to be integral to the island’s cuisine. Choclioi bourbouristoi (or else fried snails) get their name from the popping noise they make as they are being fried in a pan. Ideal for a meze with a glass of the strong spirit of Raki (Cretan drink).

As the name suggests, gamopilafo is the“rice of the wedding” and describes a traditional Cretan dish traditionally offered in many regions of that great island as the primary dish of the wedding feast, consisting of goat meat and turkey/rooster accompanied by rice cooked in the meat broth.